At the FIRST Chesapeake District Championship held earlier this month, I spoke alongside representatives from the University of Maryland, the Navy and NASA about the importance of increasing the pipeline of science, technology, engineering and math (STEM) workers—a national priority at a time of unprecedented technological growth. As objects and devices become connected and smarter today and the future of the Internet of Things (IoT) unfolds, experts anticipate a profound economic impact, potentially reaching $1.9 trillion by 20201and $6.2 trillion by 20252. 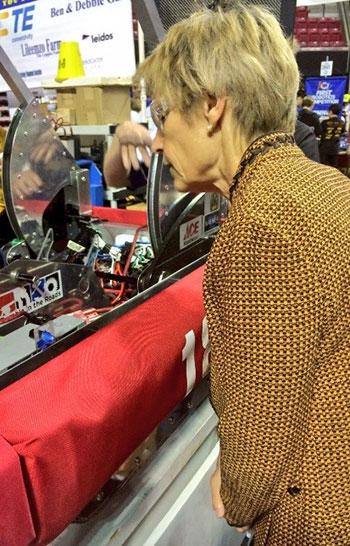 That’s where competitions like FIRST play a critical role in providing students with exposure to real-world STEM careers. Inventor and patent holder Dean Kamen developed FIRST in 1989 to create a space to celebrate science and technology and motivate young people to dream of careers in these fields. Today, more than 400,000 students collaborate and compete in FIRST to build robots, exposing them to wide range of STEM disciplines, ranging from mechanical engineering to computer science.

Qualcomm has been a proud supporter of FIRST since 2007 because we recognize the importance of inspiring the engineers and inventors of tomorrow to create the technology that will shape and improve our future. The buzz and excitement at a FIRST district championship is palpable. Yet despite the tangible impact of this program, and many others led by the private sector, we continue to face a shortage of skilled STEM workers in the United States. In fact, The Bureau of Labor Statistics estimates there will be a need for approximately 1 million more STEM professionals than the U.S. will produce at the current rate over the next decade3.

Successfully facilitating the growth of STEM requires significant investment from both the private and public sectors. In January, President Obama recognized the role of the private sector in building a movement to expand computer science nationally when he announced the Computer Science for All initiative, which calls for $4 billion in funding for states and $100 million for school districts. Qualcomm was thrilled to support this important initiative by expanding our successful Thinkabit Lab—part maker space, lab and classroom—to the east coast through a partnership with Virginia Tech’s Department of Engineering Education and School of Education, bringing the lab to the Virginia Tech Northern Virginia Center in Falls Church, VA.

While the Computer Science for All initiative is an important step to address this issue, there is much work to be done to close the gap and keep America competitive. Doing so will require significant resources from the public sector and collaboration among the National Science Foundation, Department of Education and Department of Labor, among others, to drive smart policies, funding and cooperation with the private sector.

To continue its innovation leadership, the United States needs to prioritize STEM education to keep pace with the IoT revolution that is unfolding. The future requires smart investments in STEM exposure and education from both the public and private sectors.